Red Embers transformed Allan Gardens in downtown Toronto for six months in 2019. For the first time in the city’s history, monumental art by Indigenous womxn artists was displayed for free to the public. The banners were created in Toronto and across Canada and beyond by commissioned artists and floated from 13 tall charred-black gates throughout the park. Two of the banners faced the Victorian-era glass Palm House, while the others straddled the major pathways of the park, allowing visitors to admire them from all directions and walk below them. The local eastern cedar, hand-peeled structures measure about 18 feet high with vertical posts that cross at the top.  Red Embers opened to the public with a smudging ceremony, drumming and guest speakers on June 8, 2019.  Red Embers honours the Missing and Murdered Indigenous Women and Girls, and the strength of community resilience. All the banners and gates will remain in the park from June until the annual October 4, 2019 Sisters in Spirit Vigil. Red Embers has been designed by the team of Indigenous designers Larissa Roque, Tiffany Creyke, and Citylab’s Lisa Rochon. The team won a Public Space Incubator competition grant in 2018, awarded by Park People. Commissioned featured artists include Kristen Auger, Annie Beach, Hillary Brighthill, Hannah Claus, Sarah Biscarra Dilley, Rosalie Favell, Adrienne Greyeyes, Lido Pimienta, Louise Solomon, Rolande Souliere, Eladia Smoke, and Janelle Wawia. Artists, including Catherine Tammaro and Lindsey Lickers, worked directly with our Charitable Partner, the Native Women’s Resource Centre of Toronto, to create two banners with volunteers. ​

Framing the red banners in black is a metaphor of the wood holding its structural integrity against flames. The number of installations follows the cycle of the 13 Grandmother Moons within the Lunar System. The Grandmother Moon is the leader of feminine life. For a woman who has experienced domestic violence or sexual assault, it is the Grandmother Moon that provides healing and a rebalancing of energy. The banners moved in the wind in order to carry the spirit that is fundamental to Red Embers. This movement follows the protocols of ceremony. The design team is grateful for the guidance of Elder Jacque (Jacqueline) Lavalley throughout the design process. Like regalia, some of the banners were designed with ribbons and/or tin jingle cones. The jingle skirt is danced during ceremony as a form of healing for the wearer’s community. Healing comes through the sound of the jingles, and the wearer’s footwork steps. The ribbon skirt empowers the wearer as a reminder of their resilience against cultural genocide. Other Red Ember’s artists used new forms of expression using spray paint, fluorescent ribbons or roadkill bones. In this way, Red Embers challenges the conventional view of one homogenous Indigenous aesthetic. Red Embers presented itself as a celebration of the power of art and design, and was experienced by thousands at Allan Gardens. The banners raised the profile of the Indigenous creative sector while demonstrating non-hierarchical partnerships between Indigenous design principles in the built-environment led by Indigenous womxn with stakeholders at the City of Toronto, Allan Gardens,  and with Friends of Allan Gardens. 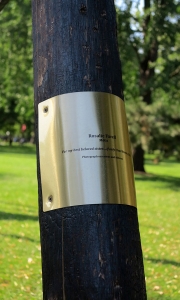 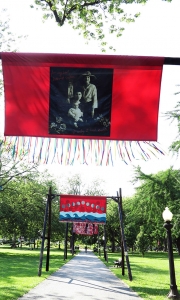 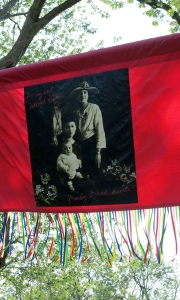 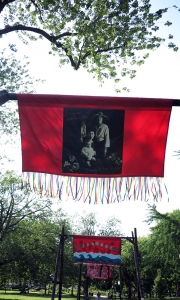 All images by Leah Snyder.