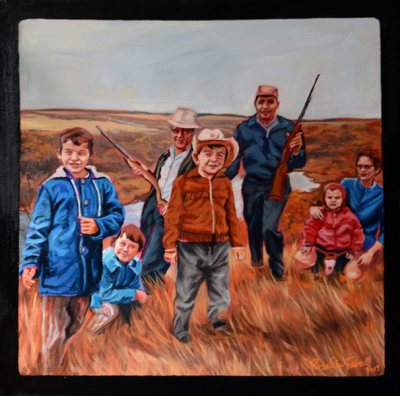 from an early age revisited (1994, 2016) is a body of work that draws upon photographs I made in 1994. Although this series was early in my art practice it explores key concerns that continue to preoccupy my practice. At the time, I became increasingly aware of the color of my skin. I started to examine my background through snapshots that my parents, primarily my mother, had taken in the early 1960s of the family. I looked at my family album, hoping it would reveal clues about my identity. When talking about my art work, particularly these works, I often recall the time I was sitting in the bathtub trying to scrub my tan off. My mother asked what I was doing and I told her that no matter how much I scrubbed and scrubbed I couldn’t get my tan off. I wanted to look like her. She told me that my dad had “Indian blood” and I had “Indian blood” and that was why my tan would not come off. We didn’t talk about it much until many years later when I started exploring my Métis heritage. Since that time, I have made many bodies of work dealing with identity. I have privileged photography as a medium. More recently, I have started  to paint. I see painting as an extension of my photography that, for the most part, relies heavily on collaging through Photoshop. I have adapted this fluid way of working to revisit my “straight” photographs. Through painting, I challenge my engagement with my subject matter. I deepen my inquiries into their significance through an extended creative process that also contests the instantaneity of the photograph. Most importantly, the process of reworking images complements how I have always treated my subject matter, especially ideas of identity, which I see as rooted in histories and traditions, but also adaptable and in flux.