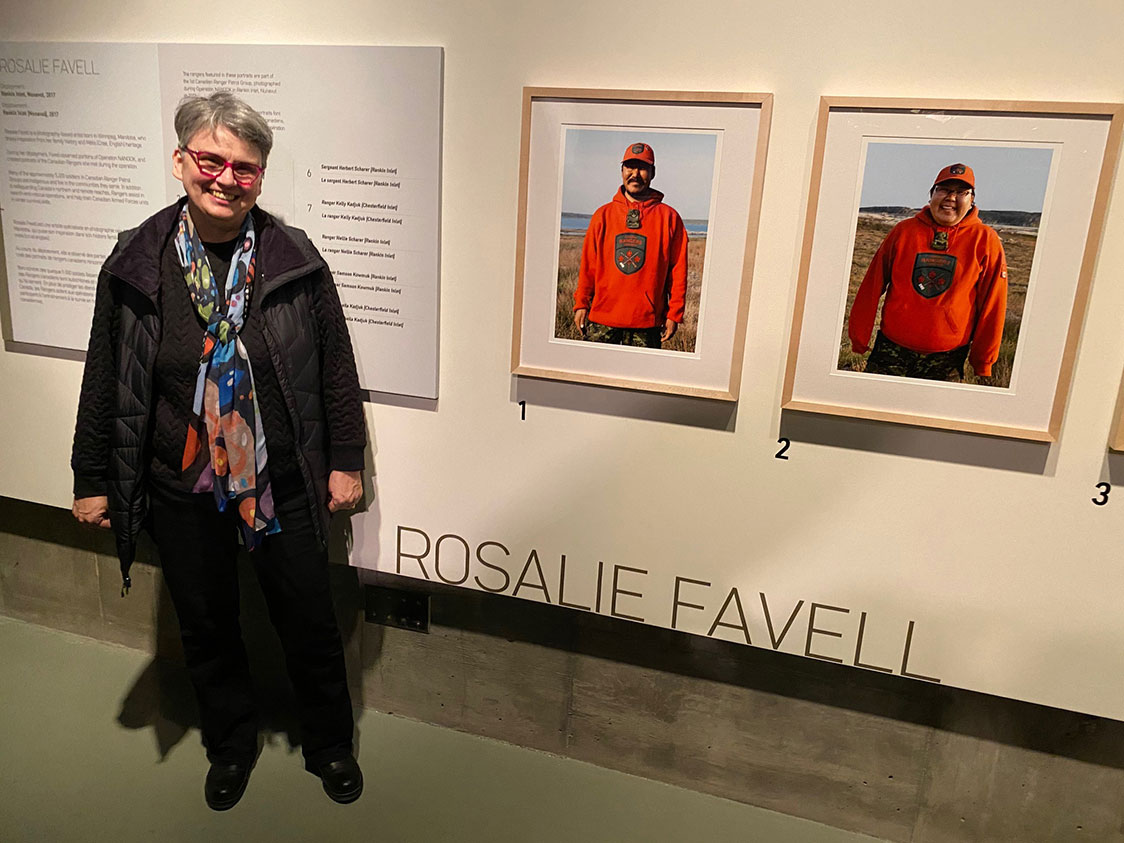 On February 14, 2020 The Canadian War Museum in Ottawa hosted the vernissage for The Canadian Forces Artist Program.

The artists were deployed between 2016 – 2018 and include Rosalie Favell along with Philip Cheung, Aislinn Hunter, Simone Jones, Emmanuelle Léonard, and Andreas Rutkauskas.

[the artists] observed search-and-rescue operations, avalanche control, and multinational military exercises. As with all CFAP participants, the artists in this multidisciplinary group maintained complete artistic independence over the works they produced, both during and after their deployments. For this exhibition, 22 photographs and three videos were selected by the Museum, in consultation with the artists. The exhibition also includes a drawing by Inuit artist Timootee (Tim) Pitsiulak, who participated with CFAP in 2010. (read more here)

The exhibition, which has garnered much media attention, will be on display until May 18, 2020. View more information at the Canadian War Museum’s website. Also, listen to Rosalie’s interview on CBC Radio’s All in a Day here. 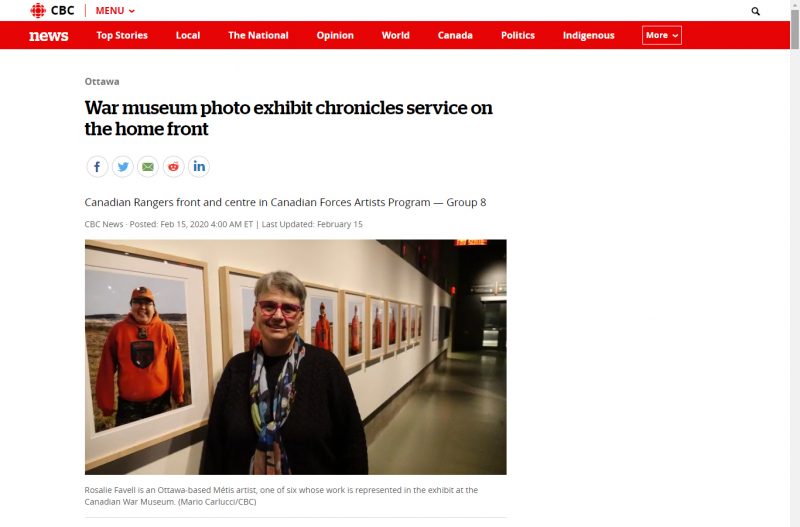 For Ottawa-based Métis artist Rosalie Favell, the opportunity to tell the story of people serving in Rankin Inlet, Nunavut, for the Canadian Rangers was a privilege.

“Indigenous people were on the land from the beginning, and they welcomed visitors to their land and helped them survive and showed them a way of life to live off of that land. And the Rangers are sort of carrying on in that respect. From my study of them, being an Indigenous person, I thought, ‘Where are my people within the Forces?’ And so it made sense to follow the Rangers and see what their role might be.”

During Favell’s deployment with the Rangers she witnessed them teach survival skills to their non-Ranger colleagues in the Canadian Forces.

“They were collecting berries, fishing and teaching them about that, specific to their land.”

Rosalie Favell, a Metis artist born in Winnipeg, learned her way around the military by spending two weeks with Canadian Rangers on an exercise in the High Arctic. The predominantly Inuit force of some 5,000 reservists has been a unique presence asserting Canada’s northern sovereignty, watching out and directing search-and-rescue missions over thousands of square kilometres of isolated and sparsely settled areas for nearly 75 years.

“As a Metis woman, I wanted to seek out other indigenous people within the Forces,” Favell said during an interview with Legion Magazine, conducted at the exhibition opening on Feb. 13.

“Also, I was totally unfamiliar with the Forces and what they do in the world. So I zeroed in on the Rangers and then applied to go north to a community and photograph people up there.”

She deployed with Operation Nanook out of Rankin Inlet on Hudson Bay in August 2017, an intense immersion during which she came to better understand the Rangers’ role and practices, including training regular force members in cold-weather survival. 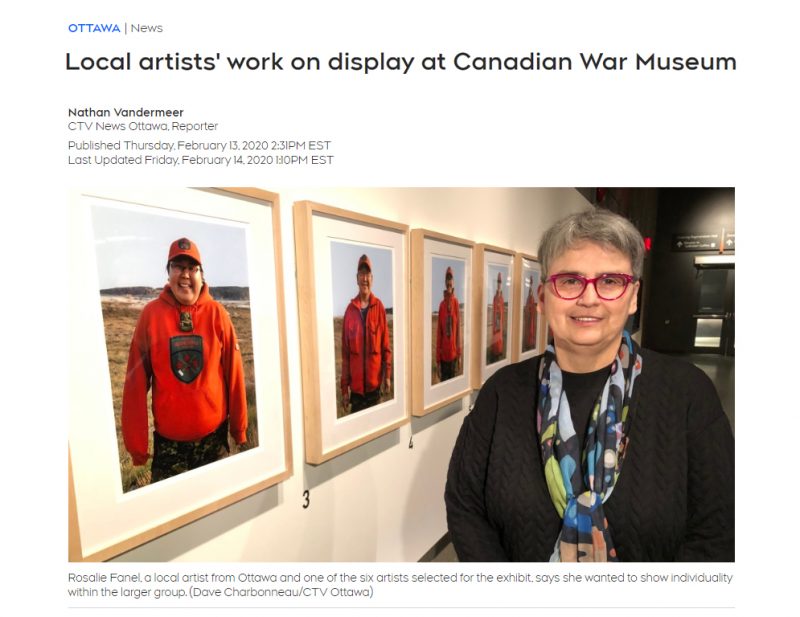 Rosalie Favel, a local artist from Ottawa and one of the six artists selected, says she wanted to show individuality within the larger group.

“I met with the rangers and did individual images…to show some of their humour, their humanity, just a slice of who they are.” 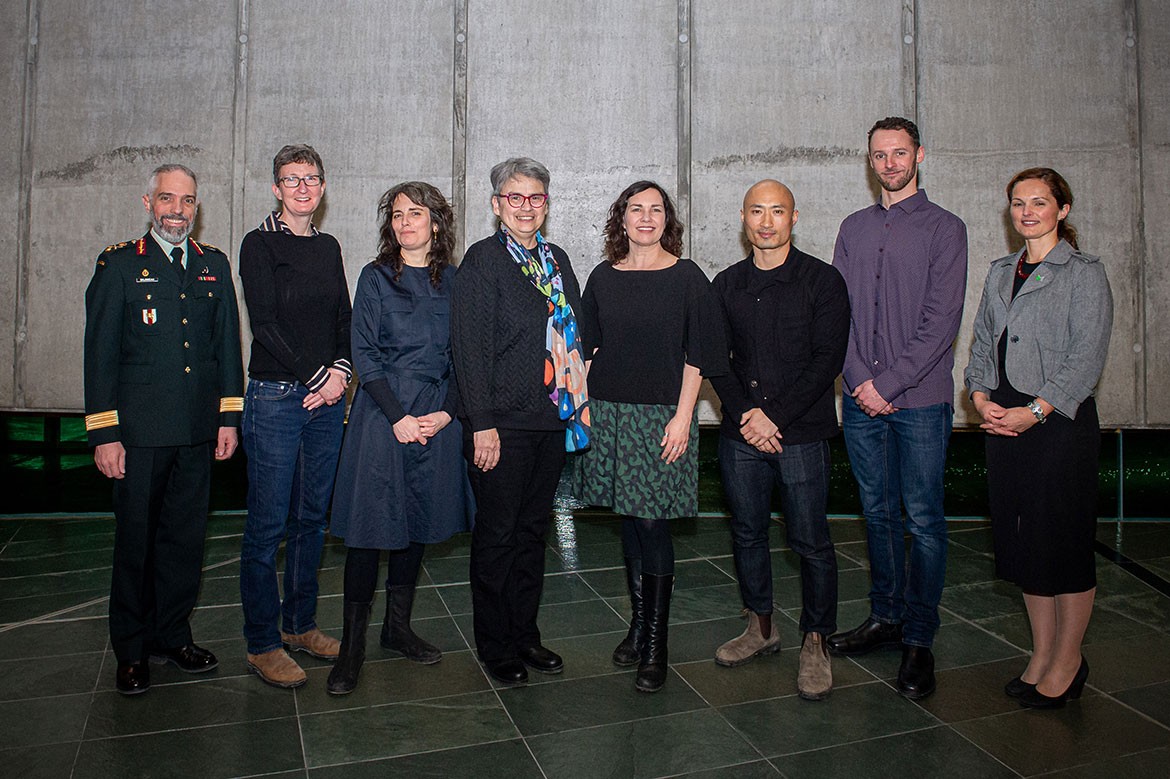 “Since the program was launched in 2001, this 8th group was the first to deploy entirely on Canadian soil, witnessing the CAF in action during search and rescue operations, avalanche control, and multinational military exercises. Several artists had the opportunity to travel to Northern Canada, allowing them to discover the remarkable work of the Canadian Rangers in this vast territory. Together, the resulting art contributes to our understanding of what it means to serve with the Canadian military at home.”

While some may believe that art’s sole form is found in paintings, the art on display in the CFAP – Group 8 ranged from photographs, to drawings, to narrative documentaries, to portraits, and video clips. The various forms of art allows for museum visitors to experience different emotions and connect differently to each artists’ work, all in their own way.